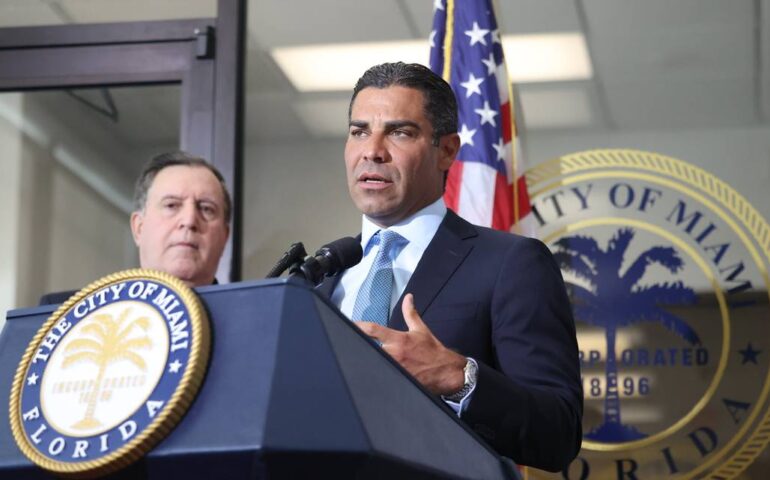 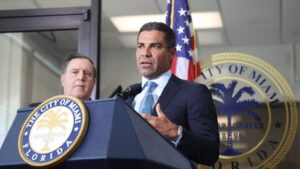 Miami Mayor Francis Suarez, right, speaks during a press conference held with Commissioner Joe Carollo to announce a pause on the plans for homeless housing in Virginia Key on Monday, Aug. 8, 2022, at Miami City Hall. 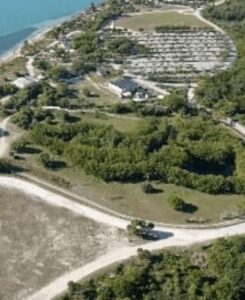 Miami’s proposal to place up to 100 tiny homes on Virginia Key for people experiencing homelessness, which led to opposition from the county and a weekend protest, will be put on hold for now. Mayor Francis Suarez and Commissioner Joe Carollo, who sponsored the concept, announced Monday afternoon that the city plans to hold off on pursuing a “transition zone” on the island’s northeastern shore for at least 6 months. Suarez and Carollo agreed to ask the City Commission to pause the effort while the city works with Miami-Dade County officials on three key issues. They said the city wants the county to help make more shelter beds available, identify alternative sites for temporary housing facilities and stop releasing homeless people from jail within Miami city limits. 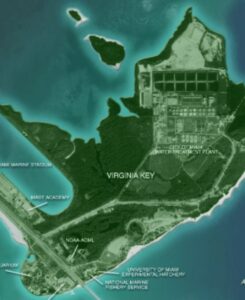 “We feel that it’s an unfair burden for the city to have to take care of all the homeless without more help from Miami-Dade County,” Suarez told reporters. The announcement about putting the Virginia Key plan on hold comes after an outcry from people across the community, criticism from Miami-Dade County Mayor Daniella Levine Cava and County Commissioner Raquel Regalado and opposition from several groups that bike, hike and paddle around Virginia Key. The chairman of the agency that manages the historic Black beach park on Virginia Key, a formerly segregated beach, also objected to the tiny homes plan.

Carollo said he was willing to sponsor a temporary pause on the Virginia Key plan since county officials appear to be willing to work with the city on the problem. He said the city has been “forced” to consider options such as the Virginia Key plan because Miami-Dade County, along with its Homeless Trust, has not done enough to address homelessness. “We don’t want to be in the business of doing tiny homes, getting involved with the homeless,” Carollo said. “But if the county doesn’t want to live up to the responsibility, then we have no choice to move on this.” The mayor and Carollo need City Commission approval to formally pause the Virginia Key plan, and that is expected to pass easily with support from Carollo and Chairwoman Christine King, two of the three commissioners who voted in favor of the tiny homes proposal. That vote is expected in September.

Clean up boring? Not when @kegkinicleanup is invol

The history of Miami can't be complete without His

Sand Castles are a reminder that we can, make our

A Miami history tour isn't complete without a visi

This is to say thank you to all the volunteers who