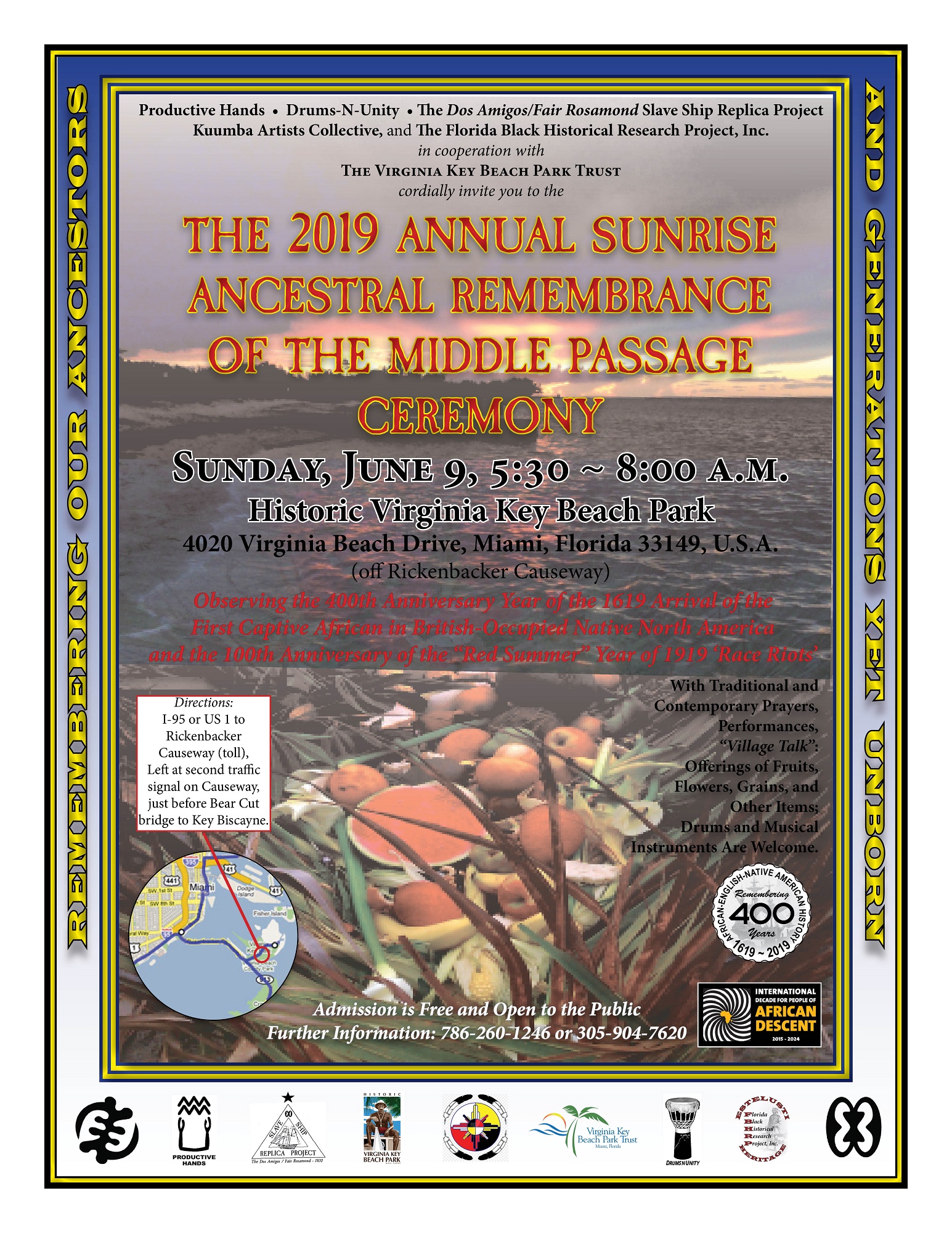 The 2019 ceremony takes on much added significance from this being the landmark 400th anniversary year of the fateful 1619 arrival of the first “20 and odd” captive Africans in British-occupied Native North America, in the fledgling colony of Virginia: an occasion for reflection, study, and assessment of what 20 generations of the African presence since that time in what would become the United States has meant to the world. Now in its 28th year, the Miami event honors the memory of all of those millions who endured the unspeakable horrors of the Middle Passage, as the so-called “slave trade” was known, including those who died even before they could be sold to the ships, between the point of their capture and their imprisonment in coastal dungeons and warehouses; the untold numbers who perished at sea; and those who survived to give life to future generations. Though nameless and faceless to human memory, the unquiet spirits of those countless lives-that-mattered are not forgotten, nor are those of the Native Ancestors of this land, whose timeless wise stewardship of it has enabled it to nurture us today, and whose genocidal “removal” by colonial invaders was inseparable from the saga of slavery.

Park gates will open at 5:30 a.m. and the ceremony will begin, as always, with a Native American Opening Blessing, followed by a traditional African pouring of libation, prayers from diverse cultures, performances, special remembrances, and open-mic “Village Talk” for the sharing of positive thoughts, insights and information, before concluding with the placement of offerings to be carried out to sea, after which there is informal family gathering, fellowship, and sharing of refreshments. Participants are invited (but not required) to bring offerings of fruits, flowers, grains, nuts, eggs, yams, and other appropriate food and cultural items that do not harm the natural environment.

This year’s powerful focus on the 400th anniversary calls for a deeper understanding of who those first Africans were, where they came from, their cultural perspectives, and what transpired during their lifetimes-that-mattered, but the importance of their story is made much more clear by the history which occurred before and since their arrival.  We recall, for example that Africans, free and enslaved, had begun arriving in Florida and other Spanish settlements more than a century earlier, and that Africans were in the Americas for centuries before European colonization and slavery, as many Indigenous accounts confirm. It is revealing that only decades 1619 the laws of the Virginia colony began to equate slavery with African identity, giving rise to racism and all of its toxic myths and propaganda.  Among the most notable historic developments resulting from that aftermath is also brought into focus by this being the 100th anniversary of the “Red Summer” peak year of 1919, when a rash of “race riots” – wanton attacks on Black people by racist mobs, including beatings, murders, and destruction of property, erupted in cities around the nation (and would continue into the early 1920s on Ocoee and Rosewood, Florida; Tulsa, Oklahoma, and other locations).

Truly, “Those who ignore the past are condemned to relive it,” and this occasion is but one of many opportunities yet to be created during the year to learn the lessons that history has to offer, including greater awareness of inseparable Native American heritage, and the connection of all of this emerging knowledge to the  upcoming “Let’s Talk: an International Day of Drumming and Healing” event on Wednesday, June 19, to acknowledge and address the centuries of trauma which we all carry within us: and to the reborn Poor People’s Campaign for economic justice and equality, all of which give real substance to this 400th year