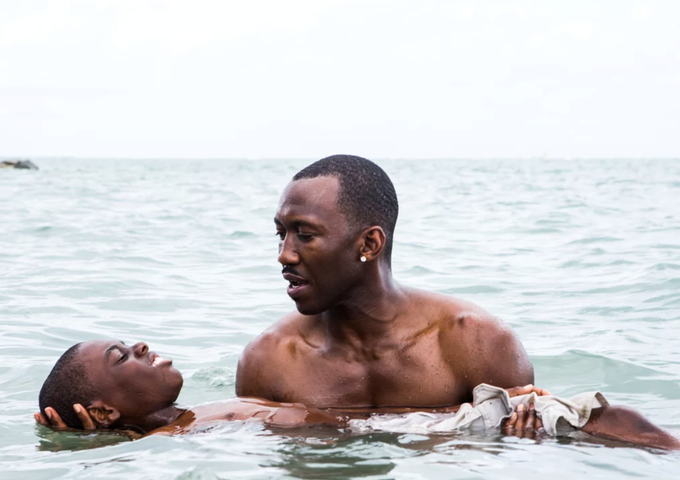 Far from standard indie or big production house arcs, screenwriters Barry Jenkins and award-winning playwright Tarell Alvin McCraney, whose mothers were HIV positive addicts, combine their diverse sexual perspectives to show us the evolution of a black boy growing up in Liberty City. Unlike trendy movies which embellish social misery and eventually let go its progressive disguise by making up through explicit sex and luxurious contrasting locations, Moonlight focuses on a circumscribed story of self-understanding and positive change while crushing clichés of African-American masculinity. Underscoring purity of love over sexuality, the blue darkness of beaches leads us to the true meaning of love between Juan and Little, between Kevin and Black.

Did Beethoven’s Sonata Moonlight had something to do with this three act structure film based on “In Moonlight Black Boys Look Blue” by Tarell Alvin McCraney? It is not present in the film score, but you simply know that it is there somewhere. As is the transformation in contemporary demographics, when Jenkins lets us gradually and sparsily observe the mix of races and classes in the background, all in poverty survival mode. Nicholas Britell’ score synchronizes this subtle effort adding hip-hop, R&B, even Mexican Currucucucu Paloma sung in Spanish, by Brazilian Caetano Veloso, and nothing has been added by chance. Even in its absence, everything connects subliminally to resist categorization.

At some point, the audience does not need to hear about drug dealer Juan anymore. His legacy already catalyzed Chiron’s journey. Jenkins wisely surpasses Black drama via a sensorial cinematography integral to the movie’s plot: the water heating on the stove, the beans, the ice cubs, the doors, all takes you beyond an obvious written world that unravels your emotions while shattering your fear of lecturing finales.

Notwithstanding most actors playing the main roles during the different periods of Chiron’s life never met during production, the portrayals of the three physically unrecognizable Chirons, and Kevins in the three more important turning points of the script, show Jenkins’ masterful skills as a director. Mahershala Ali won the Oscar for Best Supporting Actor because he came out off the screen to share a meal with us without asking for redemption. It was only a matter of time that Hollywood grew up and rewarded with its Best Picture Award a minimalist cinematic jewel like this. The eternal rivalry between discrimination and beauty will stick with audiences long after the film credits roll.